Again the Bay Observatory served as the portal to the environment work at the Exploratorium. The programs and events taking place in the Observatory that I have so far blogged about are co-produced with the Environment group. These collaborations are a very important aspect of the group’s work, bringing in a wide audience and partnering with many groups, not just science and agency groups, but educators, schools, and communities also. I hope to spare some time to profile the Environment group before my time at the Exploratorium comes to an end, so watch this space!

There are exciting times ahead for the whole of the Exploratorium, not just the Environment group. Well, that’s a bit of a misnomer, I suppose, since it’s pretty exciting here almost all the time! I am referring to 2019 being the 50th anniversary of the Exploratorium. This also makes me a tiny bit sad, since I’m very unlikely to be in San Francisco to enjoy the celebrations and events that are being lined up.

2019 will also be the 250th anniversary of the first European (Spanish) colonisation of California, and the 50th anniversary of the Indian Occupation of Alcatraz. Can you guess a link between these two events in history? The Exploratorium certainly does and plans to use this piece of coincidental timing as part of a planned wide-ranging program for 2019 – some of which will focus on human identity.

Indigenous cultures on almost everywhere on earth, not just in the United States, struggle with identity in a modern globalised world. Language is a huge part of this identity and yet indigenous languages are undergoing their own extinction event. Modern globalisation as we know it today arguably started way back in the Roman times, but certainly had an acceleration during the colonial period.

Recently there has been a lot of activity in California to not just recognise tribal and indigenous populations, but also to make their history and culture more visible to modern society. This is will be no small feat, but steps are being taken. Last night, an event hosted by the Environment Group at the Exploratorium, titled Tribal Nations Roots and Relations – Cultural Lifeways Along The West Coast sort to raise awareness of a couple of initiatives taking place, but also highlight the importance of tribal cultures and preview plans of one the 50th anniversary exhibits about human identity.

While the talk started with a bit more of a verbal introduction by The Baum Foundation’s Executive Director, April Minnich-Bucksbaum and a snippet of a video presented by Hawk Rosales, for the purposes of this blog entry I’ll present the full 10 minute version of the video here. It summaries the challenges and progress made very well.

The video paints a positive picture of “what went right for indigenous people, specifically for north coast tribes and ocean wilderness”, to quote the Baum Foundation. “Stewards of the Wild Sea highlights the pivotal role that north coast tribes played in protecting their ancestral fishing and gathering rights while participating in a unique Tribal – State partnership that brought about a dual victory for both the marine environment and tribal nations. California’s historic designation of a state marine regulation protecting the subsistence rights of north coast tribes while implementing a statewide network of marine protected areas shows how “conservation goals can be achieved” with strong leadership, vision, collaboration, and perseverance after more than a decade-long effort that included the State’s substantial investment in an inclusive public-private partnership process based on science and stakeholder input.”

This is all part of the Marine Life Protection (MLPA) Initiative, which is far more complex with a wider scope. If I’m not mistaken and heard right, April mentioned it involves 400 stakeholders and 122 marine protected areas!

Language: essence of the soul

I’ll say from the off that I was awed and inspired by Gisele Martin’s short talk. There were no flashy graphics or animations, no acrobatics or pyrotechnics. Gisele simply projected herself, her cultural background and her passion for her own identity. 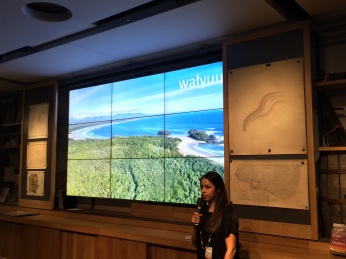 Gisele is a member of the Tla-o-qui-aht tribe, located along the coast of British Columbia. She is also one of only 6 native speakers left, and much of what she talked about involved the inter-connectivity between language, culture and land.

For instance, take the word ‘wilderness’ which is something used often in issue like this. It is defined by Merriam-Webster as:

a (1) : a tract or region uncultivated and uninhabited by human beings
(2) : an area essentially undisturbed by human activity together with its naturally developed life community
b : an empty or pathless area or region
c : a part of a garden devoted to wild growth

But for Gisele and her tribe, this word doesn’t really exist. And really I can see why using it when it is defined as above, that it is actually unhelpful when talking about giving or protecting land for tribal groups. Gisele said the closest word the Tla-o-qui-aht have more translates to ‘home’. Now to me that makes more sense… After all, indigenous people by nature are deeply connected to their land. They cultivate it, inhabit it, but it is done so in a way that is sustainable, giving a sense of maintaining a ‘wilderness’. Perhaps definition ‘c’ above is the closest you’re going to get to an accurate use of the word, in this context anyway.

Another thing that resonated me was the colonial (western civilisation) concept of the ‘use’ of a natural resource verses the tribal ‘relationship’ to a natural environment. Gisele said they don’t just have a word for ‘tree’ (“SUchas”, which literally means ‘land holder’), they have words for ‘spruce sapling’, ‘young spruce’, ‘mature spruce’ and so forth. The embedded European colonial mindest in me thought: ‘well of course, each stage of a tree’s development is useful in different ways’, and then I thought: D’OH! I’ve just proven Gisele’s point about an exploitative mindset of natural resources. But to the Tla-o-qui-aht and other indigenous tribes, it’s not about use, it’s about different stages of the life cycle, different energy flows and interconnectivity. An ‘elder tree’ contains all that knowledge of everything that has happened during it’s existence, and when it dies and falls, it will give that back to the forest by opening the canopy to sunlight, sparking new growth and adding its nutrients to the soil. It sounds poetic and magical doesn’t it? But, it’s… life, pure and simple.

In protecting ‘wildernesses’, Gisele believes that ideas such as groups engaging Traditional Ecological Knowledge (TEK) practices while well-meaning are not the same as having actual tribal groups in-situ, being really interconnected with the environment and managing an area sustainable as they have done for 100s and 1000s of years. That makes sense, put the people who know what the are doing in charge!

Gisele proceeded to give more examples of words, language and even sang a short song. For her language is exceptionally important to her identity. Depsite being a native speaker, Gisele is learning more all the time; she states:

Language helps Gisele to see the world with more colour. Her culture where language is more than just a form of communication certainly gets you to look deeper, further and with more respect for the land.

I admit two things: one; that I was compelled to chat to Gisele for a good 10/15 minutes afterwards (she was very willing and gracious!), and two; that the conversation was so natural, fluid and deep that I certainly don’t want to attempt to commentate on it here for fear of doing it an injustice. What I will say is through it I came to some enlightened thoughts about communication and language in particular. For example, I pondered how many misunderstandings, conflicts and disagreements throughout history have been at least partly due to miscommunication and standardised language? The English language, for example, seems so sterile and inadequate both to emote and describe the multitude of thoughts, feelings and interconnected concepts especially like those found in nature.

Hawk took the stage again to give us some more examples of language and culture. Here’s a couple:

Yis-tcho – what Hawk calls a ‘marine species of elk’ as they like to swim out to sea. Teaches (stories) how to behave and the consquence if not.

Tlo-kut – salmon – salmon are a ‘forest species’ since the forest, the rivers and the ocean are all interconnected – the salmon doesn’t recognise boundaries in order to go about their lives, so the need to think boundary-less like salmon is important.

We also got to see some concept art for Exploratorium exhibition space. Looks exciting!

Sustainability is tasty as it is important

Certainly worth a mention although he didn’t present is Dune Lankard from the Eyak tribe, the northern most totem and canoe-building tribe. In this region, salmon fishing is a big thing.

April supplied the event with some exceptionally tasty Copper River sockeye salmon. Sockeye salmon is one of the more sustainable choices out there, commercially. Everything I heard at this event certainly seems to me that fish that is caught by at least Traditional Ecological Knowledge (TEK), but even better if by tribal groups themselves, should be the aim of sustainable fishing. So it certainly was not a guilty pleasure to chow down on that delicious salmon!

While sampling this delight, I was in conversation with Dune, who told me about hooligan oil (I’ll let you look it up!) but also a delightful story about a 13 year old French kid, who now as an adult, is partially responsible for trying to restore the native Eyak language which was declared extinct in 2008. The story is very much worth the read as it is heart-warming in an era where language extinction is a huge issue.

I really enjoyed this mini-event, especially my conversations with Hawk, Gisele and Dune. As I helped clear up and put the chairs away, the essence of salmon on my tongue and breath, and a whole new dimension of language in my head both became synonymous for a renewed sense of pride in humanity. We just need to go back to our roots…

One thought on “Language, culture, land: Entwined in the soul”