I’ve taken a few days to get over jet-lag, spend time with the family and just generally get myself settled this side of the pond. Quite a bit of the last week has been further in transit, by road. Now I’m in Bozeman, Montana, a place close to my heart – but that’s another story…

Almost every summer while she was growing up, my wife and her family took a road trip from their home in St Paul, Minnesota (where I entered the USA) to Bozeman, Montana, where her dad’s side of the family have a place where they all get together. I then joined in this annual (almost) road trip from 2005. We’ve done the “Bozeman Road Trip” less frequently since having children.

There are a lot of things I could talk about regarding the changes seen while on the road. Perhaps I’ll come back to some different aspects later, for now I want to give you a sense of scale and landscape change.

The journey from the Twin Cities (Minneapolis/St Paul) in Minnesota to Bozeman, Montana is just shy of 1000 miles. By comparison, Lands End to John’o’Groats (the SW corner to the NE corner of Great Britain) is only 874 miles by road. More incredibly, if you transplant this road journey over to Europe, you’d pretty much be able to drive from central Poland back to London via Berlin! This gives you a sense of scale. The map below (which includes my upcoming stint to Boulder, Colorado) shows you that the 1000 miles between St Paul and Bozeman only cover three of the northern states. It also crosses one time zone.

Below is a more detailed map, coupled with an elevation chart on the journey between St Paul in the east and Bozeman in the west.

There is an obvious elevation gain going east-to-west, from a low-lying glacial pitted out-wash plain of Minnesota, through seemingly flat, but actually rising great plains of North Dakota (A & B) and eastern Montana, to the eastern side of the Rocky Mountains of western Montana (C). When driving from east to west, you would think that the landscape changes are gradual, and to some extent they are, but I think there is an argument for a ‘blink-and-you-miss-it’ change. The exurbs of the Twin Cities seem to go on forever along the I-94 freeway, merging into others such as St Cloud (the setting of Juno – fantastic movie). The first real change comes after the MN-ND border, when Fargo is in the horizon behind you.

I love taking panoramas using my iPhone (by the way, if you upload your panoramas to Facebook, it will convert them into 360s.) They are very useful for teaching about landscapes.

Usually we stick to rest areas for convenience, but we were in-between rest areas which can sometimes be an hour or more apart and Chautauqua Park in Valley City looked interesting. The land is undulating enough with broad valleys. This provided a challenge to the early builders of railroads which ventured into the “Wild West”. Many railroads followed the contours and avoided the difficulty of traversing undulating terrain. But here in the appropriately named Valley City, the railroad was built on a “Hi-Line”. Theodore, my 3-year old, was thrilled to see not one, two, but three freight trains use it as he played in the playground nearby.

Click here to see a Google Street View image from the I-94 freeway outside of Valley City. You can’t see the Hi-Line bridge, but you see the track that leads to it and the landscape that surrounds it.

Crossing the Missouri River westwards between Bismarck and Mandan, the landscape makes another change. And just a few miles further, is a point of interest that is always a stop on the Bozeman road-trip! The ‘worlds largest Holstein cow‘ at New Salem has become part of road-trip folklore for my wife’s family – making up fun stories of ‘Salem Sue’ during her childhood. For me, the best attraction is actually the envious view that Sue has, looking northwards from School Hill over the plains towards the I-94 freeway.  The view makes the landscape deceptively flat, but if you clicked on the ‘School Hill’ link and investigated the terrain map, you’ll see there are many prominences and troughs which gradually increase west into Montana.

Click here for a view from the interstate. Can you spot the giant cow? 🙂 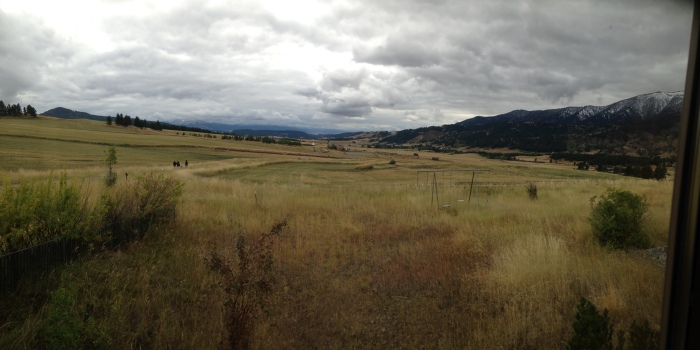 The landscape of western North Dakota continues for a while into eastern Montana, until you get first sight of the Crazy Mountains. While you can tell the landscape starts to become mountainous after the change from I-94 to I-90 at Billings, but you are certain to see the ‘Crazies’ by the time you reach Columbus and Big Timber. The origin of the name of the these mountains is a very good tale and worth a read. Their sighting, for me, signals the ‘home straight’ for our long car journey, even though Bozeman is still a good hour away. The interstate starts to weave more through cuttings and passes as the mountains become more pronounced from the landscape. The city of Bozeman sits upon the exit of the ‘Bozeman Pass’, to quote John Bozeman, by being well placed and “…ready to swallow up all tenderfeet that would reach the territory from the east, with their golden fleeces to be taken care of.” Geography really did play a part in Bozeman’s fortunes.

We actually turn off the the I-90 just before the Bozeman Pass to take a local route to the family house. The panorama above is taken from the house looking down Bridger Canyon valley looking roughly south-south-westwards towards Bozeman, with the Spanish Peaks majestically framing the horizon. This Google Street View image is placed on the eastern edge of Bozeman where the pass opens out.

I have to say that Bozeman and Greater Yellowstone Area is probably one of my favourite places in the world so far. I have a lot of emotional, and, in an environmental sense, spiritual attachment to it. I even got married here. It’s a little sad that this was only an extended pit-stop. Today, on the eve on continuing to journey to Colorado, I’ve finally started to feel settled only to be moving on again. Hey-ho… we’ll be back here again later in the year for a longer stint, and Boulder isn’t exactly a bad place for someone of my world-view and interests to be! 😉