…or more accurately: “weather can’t keep the climate away from the Bay”, but then the title pun wouldn’t work so much! *facepalm*

The stereotype that us British love talking about the weather is pretty much nonsense. Not that we don’t, it’s just other people who don’t live on our historically ego-centric isles do. San Franciscans can challenge any Brit any day to a gossip-to-the-death about the weather. Believe me.

When Kate and I offered a choice of training topics to the Explainers, they went with ‘Why is San Francisco cold in the summer?’

Now, my one and only summer in San Francisco (part of a cross-continental US road trip with my wife in 2010) didn’t seem that cold to me. 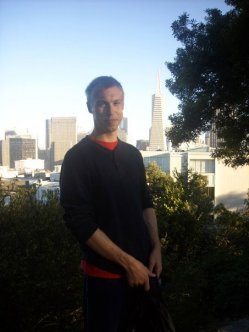 San Francisco in August 2010. Warm enough not to need a jacket, but cool enough for a light jumper! 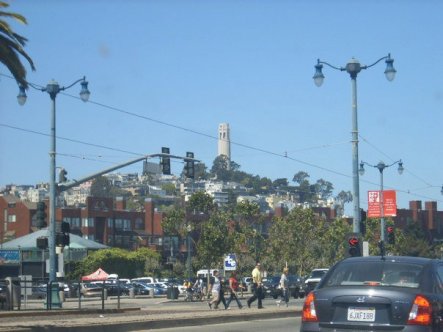 The weather on this day in August 2010 called for t-shirts, but thin layers too.

But then I would be an absolute muppet for using that singular experience to make a judgement on what San Francisco is like in the summer. After all, I only experienced a sample of SF’s weather, not it’s climate. However, Kate, most of her colleagues and the Explainers have lived in San Francisco long enough to get a feel for San Francisco’s climate… I, only being here for one winter period, never will (unless I plan to live here in the future… who knows, eh!?). Statistics can tell us non-natives a lot, but there’s nothing like experience. (The best weather forecasters, for example, are those who have worked in the same region for decades; using their experience as a component with all the data and technology to making a forecast).

First, lets play a game. This is more of a test about how experienced you are of the place you live, rather than knowledge of climate:

One rule: You have to do this based on where you currently live. Not where you grew up or lived the longest time (although you could have another go after the first time around and compare…). Where are you living right now? (I’m living in Berkeley, California… although only for 2 months)

Step 1: Ok. So, which of these letters do you think suits where you are living right now in terms of what you experience on average (climate), not today or recently (weather)? Pick the one you feel fits best on average.

Step 2: Alright, same again. This time pick from one of these ones… notice that there is an upper-case ‘W’ and ‘S’ and a lower case ‘w’ and ‘s’. You can only pick one of the 6 letters below that you think fits where you live on average. Don’t feel bad if you need to look up the definition of steppe or monsoonal etc! I had to double check meself! 🙂

Step 3: Last set. Pick one, again, thinking ‘on average’. (NB: I left out two from this one; highly unlikely they’d get chosen!)

Step 4: Alrighty then. Put the three letters together. What did you get? This is your guess of the climate of where you are living right now. So my fellow Brits may have guessed Cfc or Csb or even, I wouldn’t be surprised, Dmb – or whatever.

What you have guessed is called the Koppen-Gieger Climate Classification for where you live.

Step 5: Were you right? Click here to go to awesome interactive map showing all the climate classifications. Find the nearest icon to where you live and click on it. The ‘correct’ answer will be displayed at the top of the graph, labelled ‘Classification’. 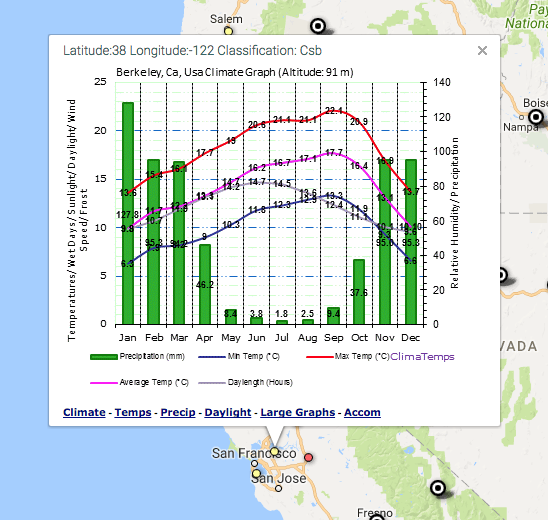 (Don’t worry if you don’t understand the graph – they take a little getting used to, but don’t let it stop you from having a go at interpreting them!). Berkeley (and so is San Francisco) is classified as ‘Csb’. Meaning it has a warm temperate climate (C), with dry summers (s) and warm summers (b).

Step 6: To what extent were you right? Spot on? Way off? Well, I bet that if you have lived where you are currently located for decades, you got it mostly or totally right, amirite? Proving to you that experience does matter, and in this case, already makes you a climatologist of sorts! 🙂 Now, if you like, you can do it again for somewhere else you’ve lived. On average, you’re more likely to get it right for a place you have lived longer.

Going back to San Francisco. Given the choice of Explainer training topic, I wonder how many may have guessed Csc instead of Csb. But ‘c’ instead of ‘b’ would mean summer temperatures as low as around 10°C/50°F on average – that’s comparable to places like Reykjavik in Iceland, Cold Bay in Alaska or the very southern tip of Chile, which is closer to Antarctica than it is to the equator! So, San Franciscans, don’t you think you are over-reacting a tiny bit? Over-reacting about weather and climate is our (British) thing… (get off our lawn!) 😉

Joking aside, those who live and work in San Francisco do have a point for feeling like it’s ‘cold’ in the summer. Check these climate graphs out:

Sacramento is only 75 miles north-east of San Francisco (that’s around 25 miles shorter that the distance between central London and Norwich, colleagues back home!). But there is 10-15°F difference in average summer temperatures, more than enough for you to be panting like a dog on a hot summers day in Sacramento, but having to wear a light jacket (likely one of these) in San Francisco if on the same day, it was on the cool side.

So, WUWT (what’s up with that)?. It’s all to do with San Francisco’s microclimate, which is pretty cool (literally, in this case!)

This breeze… it sucks, man!

The wind plays a crucial role at keeping San Francisco, and most coastal areas in California, cooler in the summer than its neighbours.

Indulge me for a second… How many of you have read the ‘Owl At Home’ book by Arnold Lobel (the same guy who wrote Frog and Toad) as a kid or to your kids? *Raises hand*. Well, if you do, you’ll get the reference straight away, if not, stay with me…

So there’s a story where, it’s winter, and Owl hear’s a knocking at the door. He opens the door slightly only to find no-one there. After dismissing the noise and closing the door, the knocking starts again. Eventually Owl believes it is Winter itself who is knocking. He opens the door wide to let Winter in and WHOOSH! it blasts through the house being a rather ungrateful and mean house guest.

You see, Owl’s house was nice and warm due to the lovely fire he had alight in his fireplace, and due to a lesser extent, his hot soup. But outside it was cold, enough for it to have been snowing. The knocking noise Owl heard was because his door clearly isn’t draught-proof, so the cold air outside was trying to find opening it could around the seals of the door etc to get inside, giving the door a good little rattle with every gust. When Owl opened the door wide, the cold air rushed in knocking Owl out of the way.

The cold air outside is more dense with air molecules. It has higher pressure.

The warm air inside is less dense with air molecules. It has lower pressure.

That’s why you can get those pesky draughts running through your house if it isn’t insulated properly. So now, instead of a house, think of an entire region or even the entire planet. I’ll turn this over to Bill Nye; he does explaining better… 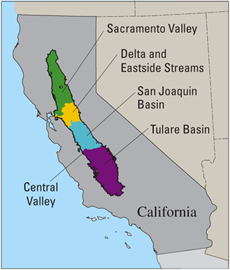 The Central Valley can get pretty hot in the summer, with average highs in the mid-to-high 90s (mid-30s in Celsius). Conversely, the eastern Pacific in this part of the world averages around 60°F (15°C) in the summer. In general therefore in the summer, air moves from the cool Pacific Ocean over towards the warm Central Valley. There’s your chilly summer’s breeze, San Francisco! Sucks, huh? Literally… that cold air being sucked in to the east from the west…

If you do an image search for ‘San Francisco fog’, you get iconic images like this:

The summer breezes that come through San Francisco often bring this magical scene. This is due to the geography.

Those breezes coming off the Pacific can continue to stay cooler by entering the bay through and around Golden Gate, the bay’s opening (and site of the famous Golden Gate bridge). So rather than the fog forming just off the California coast disappearing as soon as it hits the warmer coastline, it can invade that little bit further in thanks to the cool bay.

In fact, this is why San Francisco and those areas around the Golden Gate can get a bit gusty too. Think of the Golden Gate like Owl’s poorly draught-proofed door. And when the temperature difference between the land and sea is even greater, it’s like Golden Gate is Owl’s door being flung wide open. 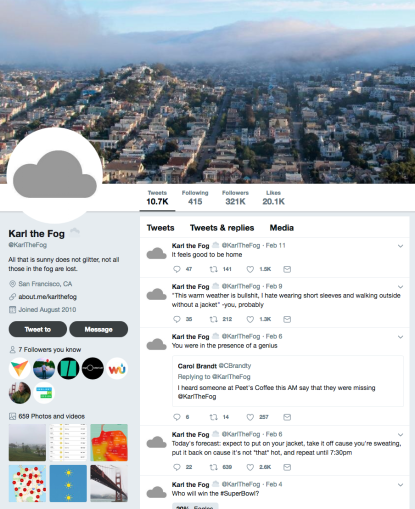 The fog keeps San Francisco cooler still, since fog is basically ground-level cloud. We all know from experience that shade and cloudy days are cooler than sunnier ones.

Usually when the day heats up, the fog disappears usually to return the following morning.

San Francisco’s fog is so famous, that it’s even been personified. Karl the Fog has his own twitter feed that I really think you should check out for giggles, although it can be a bit foul-mouthed at times when the weather isn’t going its way (too sunny!).

So there you have it: why San Franciscans feel like its damn cold in their city in summer. The truth is, it only feels cold relative to an average warm summer climate… but, we’re human, and our feelings matter!

For further reading check out these links:

Enjoyed this entry? Please sign up to email alerts by clicking on the ‘Follow’ button in the bottom right, giving you a shout when I post again in the near future! 🙂