Not having to spend an entire weekend catching up on a week’s work and trying to get ahead of the next week’s, and, admittedly, being away from the family has given me the opportunity engage more in the community. It’s a bit ironic, really, that stepping away from a job, where I’m a very visible and integrated member of the local community, has given me more time to engage with it outside of a usually very narrow remit.

So I got on my bike one day, and volunteered at a community event the next…

On Saturday I went out for an extended bike ride, most of which is in my school’s catchment area. I hadn’t done such a thing for a long while, but doing a lot of cycling around the San Francisco Bay Area I feel I’ve got a respectable amount of fitness back. Plus the weather was nice! I also have to thank the likes of Fearghal O’Nuallain and Dan Raven-Ellison for re-inspiring me to just get out, explore locally and reconnect with the geography. I feel using the term I ‘gave up some time’ to go for a bike ride pretty disingenuous. I didn’t miss out on anything by going out, and I felt better for it. So, I gave time, instead.

Mapping the route I took from memory on DigimapForSchools and using the ‘measure’ tool, I astonishingly did almost 40km. Even more shocking was that I didn’t feel like the Tin Man from The Wizard of Oz afterwards. But what was nice was just absorbing myself into the domain of the students I teach, reconnecting to their world, their landscape. I even bumped into a bunch of ex-students playing in the river at Shotesham Ford.

Despite having lived and/or worked in this area for well over a decade, I still made some discoveries. Here’s a quick summary of four observations in particular, which are highlighted in purple on the map above:

An extra note about the River Tas: It’s a tribuary of the Yare. The Yare enters the North Sea at Great Yarmouth (hence the name ‘Yare-mouth’). But this is the cool thing: back in the days of Doggerland, the Yare fed into the ancient Thames which itself fed into the River Seine, draining into the Atlantic. So, continental and global scale geography may be cool to learn, but the roots are often local.

Don’t wander too far, for what you seek may be only underfoot

All weekend were the Spring events of the Norfolk Festival of Nature, based in The Forum in Norwich. While I didn’t attend Saturday’s events, I volunteered to help out the whole day on the Sunday.

The role I played has become a familiar one to me now. General busy-body helper-outer media officer (i.e. taking videos and pictures, and on this occasion, sound clips with a cool voice recorder). On top of that I speak to people, both participants and members of the public, using my knowledge to enhance visitors experiences. It was nice to carry on this kind of ‘work’ back over here this side of the pond after having a good time of it in San Francisco.

The idea behind the Norfolk Festival of Nature is to try and reconnect the general populace of Norfolk to nature.

“Through the Norfolk Festival for Nature we seek to empower our audiences to explore the creative impact of nature, its cultural importance and central place in their lives.” – norfolkfestivalofnature.co.uk

A number of organisations were present with information stalls, activities and exhibits. All stalls got a fair amount of attention, but most popular certainly were the Broads Authority.

Nick Sanderson and his team were at it all day, their enthusiasm never wavering. The constant message Nick was giving to those looking at the creatures in their water tank was that these aren’t from the far-flung tropics, these are invertebrates that live in water courses right here. Each creature with a unique characteristic, ability and adaptation; each with a role in its ecosystem. 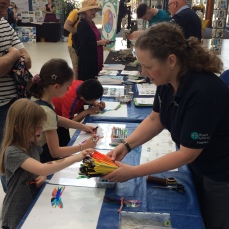 Make your own dragonfly

Spy wildlife from the reedbed

The Broads Authority were also promoting their outdoor festival, which is happening between the 28th April and 13th May. The programme looks very extensive, so if you are in the area or plan to be I would certainly suggest you have a look. There are a number of free things to do, such as having a go at canoeing, dyke dipping at Thorpe Marshes in Norwich, river walks, and more. For me, there could be some more opportunities for volunteering, too!

The Norfolk Wildlife Trust were also present. It was good to see a some familiar faces, especially Annabel Hill and David North, with whom a team of our students worked to increase awareness and enjoyment of the many pathways and trails around the county back in 2015.

All our lives are better when they’re a bit wild 🚤 Go wild this June with #30DaysWild https://t.co/kT3B5zjJZ2 pic.twitter.com/W6faqPeF4a

I was delighted that the University of East Anglia had a presence at the festival. The UEA have pushed hard to be a leader in sustainable practices, and their dedication is apparent by having a dedicated team called “Sustainable UEA“. They engaged visitors young and old by getting them to be creative. The grown ups were asked to write a recipe card for ‘authentic hope’; positive affirmative actions (analogous to ingredients and methods) to tackle environmental issues.

A busy day at the Forum for the Norfolk Festival of Nature – some wonderful drawings from the next generation of Climate Heroes 💚 #earthday pic.twitter.com/cyzRdb6KzU

The youngsters wrote and drew on paper balloons and ‘launched’ them (pinned them to the board), giving positive but simple actions they can take to live a more sustainable lifestyle.

What was left was a colourful and vibrant display of positivity. If you get people smiling and bouncing about taking action then they are most certainly more likely to follow through.

There were also a series of talks given in the Forum’s auditorium (see here – e.g. did you know hippos were normal for Norfolk? ;)). I had the chance to go listen to the “Lady of the Reeds” talk presented by James Parry:

“Emma Turner was a pioneering Edwardian photographer and author who spent many years studying the birdlife of the Norfolk Broads, most famously at Hickling, where she lived on a house boat in the middle of the broad. With the assistance of the local marshmen, she was able to capture compelling images of some of the area’s most elusive birds and was instrumental in the rediscovery of the Bittern as a British breeding species in 1911. One of the first ten women to be elected a Fellow of the Linnaean Society and awarded the Gold Medal of the Photographic Society, Turner’s legacy passed largely unnoticed until the chance rediscovery in recent years of correspondence and some of her original images, previously thought lost.” – theforumnorwich.co.uk/norfolkfestivalofnature

SO PRETTY! Loved introducing everyone to my beautiful new stick insect this morning with @SupportNWT pic.twitter.com/yE5KcbpARs

One of the most enjoyable parts of the day was going on a guided ‘tree trail’ walk around Norwich City Centre with John, a volunteer with the Woodland Trust. The idea was a simple but effective one: take groups of visitors out for a short walk around the city centre, telling stories about some of the trees found there. How many features of the landscape, both human and natural do you think you miss, not register or simply ignore as you go about your daily business? What if someone can point out something you never spotted before? Or tell you a story about a building, a marking, a cobble in the road or in this case, a tree in the middle of an urban forest?

I’ve scanned in the Norwich City Tree Trail leaflet, so do go ahead and take this short walk for yourself and get enlightened! Take it from me, every time you go into Norwich you’ll appreciate the trees there a lot more.

So then… How about just going for a walk (or a bike ride)? Go for it. Take 30 minutes, just around the street, or the block, and observe one thing that you never noticed before. You may feel compelled to find out more when you get back home, or you may not. It doesn’t matter. But I bet it’ll make you feel a little bit better. For me, this weekend has been very welcome having been away for a while. I suddenly feel reconnected and not so out-of-place. Yes, I’ve had some incredible experiences so far this academic year, but sometimes, there’s no place like home… So, go explore it!