A strong theme of this week was the fact that there is more we don’t know than we do! When I first started my placement last week, I was very apprehensive about how out of touch and ignorant I was of all the processes and knowledge surrounding NOAA ESRL’s endeavours. And of course, without the knowledge there can be no understanding. I thought I would be way out of my depth.

While the past two weeks has shown that feeling was more or less justified, I’ve quickly learned that it’s totally fine to feel that way and totally within the norms of working in a place such as NOAA ESRL. In some cases I’ve actually been pleasantly surprised how much I have understood.

Tuesday morning saw a fortnightly meeting of the Global Monitoring Division. The procedure started off in familiar fashion, going around each person to see if they had any announcement or feedback, in which Pieter Tans gave the opportunity to introduce myself. The next hour and a bit was delivered by Andy Jacobson, giving the department an update on the Carbon Tracker project. There was a lot of focus on how well the programme was modelling fluxes within the marine boundary layer (glossary). It was quite technical, and as Andy presented there was plenty of to-ing and fro-ing but mostly amongst a small proportion of the attendees, mainly those collaborating on Carbon Tracker itself. The majority of it went over my head, but I tried to stay with it. Being a visual learner I felt I understood the visualisations and graphs a bit more, and later after the meeting when I read up on some bits and got some clarifications on definitions and processes, quite a bit more actually came into focus. Sitting here now, however, on the following Sunday and I cannot recall much of what was said – but that’s unsurprising. In the end I probably understood about 25% of the entire thing. More importantly for me however was the realisation that not everyone in that room who was not directly working on Carbon Tracker actually understood 100% of it either. I asked a colleague sitting next to me how much of it he got, and he said (and I’m paraphrasing) “…probably about 30%, but that’s normal! You’ll find that when different groups get up and do their presentations, you’ll find enough people in the room not part of that group are not fully getting it either.”

And that, for me, was the key.

In that room full of experts, they are still reliant on each other and each of their different interpretations and levels of understanding. Indeed, it allows for more collaboration and different approaches to solving problems or theories. Not everyone in that room has to understand absolutely everything that everyone else is doing, but they do need know enough about what is going on in order to progress. It was a good microcosm observation of the scientific process itself.

The Friday before that meeting I attended a seminar on “Mechanisms for convective aggregation in idealized and realistic simulations”, more to test myself and to see how far out I was with my knowledge and understanding. And I was way out! I probably understood about a quarter of the whole thing – I left that seminar feeling hopeful that I understood that much, but a little down that I was so far out of it. But Tuesday’s meeting put that all into perspective, and I feel a lot better about it. So the questions I have posed myself are:

From my point of view, of someone usually from the outside-looking-in, these questions are probably equally valid for the people actually working here too. And there is something to be said about knowledge being key. For example, so many acronyms were being thrown around like MBL, LEF, OCO-2… When I finally caught Andy (or someone) give those acronyms in full or I sneakily looked them up on my phone, I think my level of understanding of what was being said jumped about 10%! (If you are interested: MBL stands for ‘marine boundary layer‘; LEF is the code for an observation site in Wisconsin and OCO-2 is a carbon tracking satellite deployed by NASA).

What further encouraged me was that one of the scientists on the team working on Carbon Tracker told me that when she first started working during her post-doc, that she felt similar to being thrown in the deep-end and worried about not understanding what’s going on. From my observations during the meeting, she was now exceptionally effective with her ideas and probing questions. 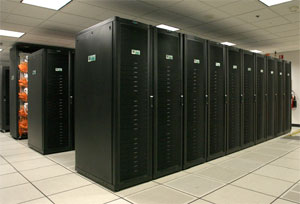 Another remarkable thing I realised from the meeting was it appeared that per-unit of computing power, science is moving as fast if not faster than computing power can keep up.

NOAA Boulder do have their own supercomputers which are used for a number of processes, from climate modelling to weather forecasting. One of the frustrations vented at the meeting was a familiar one that any department in any industry experiences, and that’s the allocation of a ‘budget’. While it may be financial-based, or human resource-based, you can only work with what is available. And if that resource has to be shared amongst people or departments, then you have to have allocations and budgets. Andy’s Carbon Tracker team for example were attempting to brainstorm ideas of how models can be tweaked and re-run etc, and a few ideas were being flung around, but Andy had to reign all that in and emphasise priorities given that they had to work within their allocation of computing processing time.

Given more funding, I’m sure NOAA Boulder could easily decide to increase their supercomputer capacity and therefore increase allocation of computing power to different departments. So to all you out there who think science is awash with money and resources, think again! Next time you are begging your company’s business manager for a bigger share of the budget… There is so much more science that needs to be done and some of it has be postponed, or put on the back-burner. It’s as if the science that could be done at NOAA Boulder (in terms of computer-use) is outstripping the computing power they have, seemingly bettering Moore’s Law, of sorts!

So to end this long, wordy blog entry (thanks for staying with me!), let’s go back to one of the questions I posed myself: “How can I bring the expertise, knowledge and skills that I do have to be a productive member of the team?” When it comes to educational outreach and turning information into a more understandable format for those lower down the knowledge food chain (I include myself in that!), then I’m in my element…

Liaising between the team who deal with educational outreach and the Global Monitoring Division, we came up with the idea of replacing an out-of-date map that is referred to on the public tour. Rather than simply updating it, I set about adding some extra visual information that can help the reader understand or the tour guide explain who the greenhouse gas monitoring network works.

Hopefully, if anything, I’ve shown that everyone can be a useful member of a team, even if they do feel in over their heads!

UPDATE (6th March 2018): It may have taken a while, but the final version of the poster has been printed, framed and is now up in the GMD tour stop corridor! The new map display compliments both the glass-flask sample case, the model AirCore and the giant CO2 graph on the opposite wall. 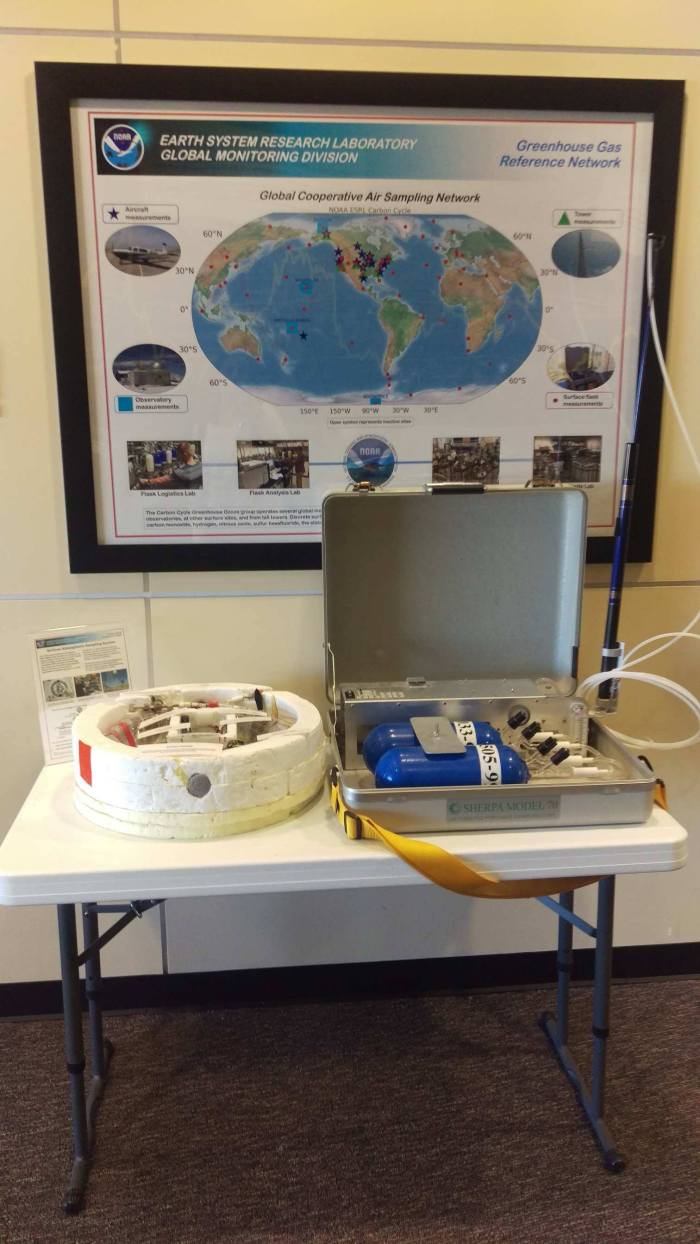 One thought on “In over our heads (and that’s okay!)”