The whole of this week I was involved in the AirCore project here at NOAA Boulder, and I was in full geek-mode for pretty much the whole time!

The AirCore was invented almost a decade ago and developed right here in the GMD by Pieter Tans and his colleagues. With regards to collecting air samples, it is unique in that it is able to collect a ‘profile’ of air from height, usually from the middle stratosphere 30km up all the way down to the boundary layer and ground. The AirCore idea has gained traction, and there are now organisations worldwide making use of it, including in the UK (University of East Anglia), the Netherlands (University of Groningen) and Finland (Finnish Meteorological Institute).

More details about how it works can be found here, but I’ll give a basic overview.

The AirCore is a hollow stainless-steel tube, wound in a coil with valves placed at either end. This along with other gizmos such as a GPS and a data-logger are placed in a Styrofoam capsule for protection.

Firstly, the valves are purged (mostly to remove moisture) and then the stainless-steel tube is filled with a gas of known amounts of trace gases. This both purges the AirCore of anything unwanted (such as any moisture) and sets it up for analysis later. In this case, air with a fraction of CO (carbon monoxide) of 10ppb. It’s important that this ‘fill gas’ is clearly different from what you may get in the atmosphere.

Pausing the video above near the end, you can see the analyser reading around 10ppb of CO and 0.008% of H2O (we’d want that as close to zero as possible). When the analyser starts measuring the known quantities of the fill gas, it is left to pump through the AirCore until we are satisfied we are getting nothing but the fill gas coming through, with as little moisture as possible. Depending on the length of the tubing, this takes around 20 minutes, plus another five of steady readings to be sure. This also allows us to check if there are any leaks in the tubing, which will show up as readings of the air in the room instead.

After purging the first AirCore, Tim Newberger will do this again with a second, as flying two at the same time allows us to cross-check our sample in case one AirCore is faulty. Best to double up.

Meanwhile, Jack Higgs is going through the logistics ahead of the flight (you may remember Jack from my previous post about flying a vertical profile in a Mooney aircraft). You can’t just launch a weather balloon when you feel like it, from anywhere you want.

A launch site has to be carefully selected during predicted weather (wind) patterns. It turned out for our flight on Wednesday, launching the AirCore from NCAR or here at NOAA Boulder gave a predicted flight path too close to Denver and even had the possibility of it landing in a densely populated area or Denver International Airport (DIA)! So it was decided to launch further out to the north-east near Platteville.

Jack also ensures that all the equipment for the flight and tracking is checked and tested.

Jack’s laptop with a program that predicts flight paths sitting next to a case full of tracking equipment. 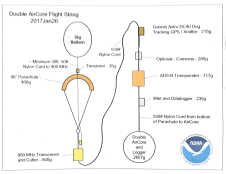 By this point I realise that a lot of careful planning and preparation goes into a single weather balloon flight; I’ve always wondered when I looked at pictures of weather balloons what all the gadgets hanging down from it are, and why there were all necessary. Now I know! My favourite, you’d think, would be the video camera which can look up or down the payload during flight. But while that gives amazing footage, as you’ll see later when I create the edited video, my favourite is actually the dog tracker! It’s main function is to aid retrieval via GPS after landing. I suggested that all future AirCores should be named after famous dogs like Lassie, Cooper or London (The Littlest Hobo *nostalgia*), but was quickly dismissed.

Wednesday morning, and we head out to Platteville to launch! Upon arrival, with the wind direction in mind, Tim and Jack proceed to get set up with me lending a hand.

While Jack lays out the payload along the ground according to the set up and check each item through, Tim inflates the balloon inside a weighed-down canopy. This is to ensure the balloon doesn’t get jostled around by the wind and risk bursting. It also allows for a more controlled launch.

And then, at around 11:00am MST, we’re ready to go! Jack held the AirCores to stop them scrapping across the ground, Tim was ready to ensure the balloon cleared the canopy and I was given the honours of ripping the Velcro! I’m going to be mean and hold back on the video of the launch to entice you to come back later when the edited video is ready >:)

As the AirCore rises, the drop in ambient (surrounding air) pressure causes the fill gas inside the tubing to evacuate. As that process begins, we pack up our gear and begin the chase!

Back on the ground, we’ve been doing our best to keep up with the AirCore’s flight. With Tim driving, Jack keeps track of our chase car’s position and the position of the AirCore.

By the time the AirCore reaches the peak of its flight at 95,000ft, almost all the fill gas has left the tubing. The instruments on the payload detect it is at 95,000ft and activities a cutter, severing the string attaching the balloon to the payload. The parachute deploys as the payload falls. Now here is the clever part thanks to simple physics: as the AirCore descends the air pressure outside of it increases, forcing the surrounding air into the tubing, first passing through a small magnesium perchlorate filled canister (to dry the air) and then through an open valve in an attempt to equalize the pressure inside and outside the AirCore. By the time it hits the ground, you have a vertical profile of air sampled throughout the tubing. This explains the name ‘AirCore’ as it is analogous to drilling down layers of ice to get an ice core, here you collect a sample through layers of air.

It’s been about an hour and a half since we launched the balloon, and now on the ground, we position ourselves the best we can as the AirCore makes its ‘final approach’.  We park the van up a dirt road next to a corn field, where we think the AirCore will land and gaze up into the sky to spot the red parachute coming our way. 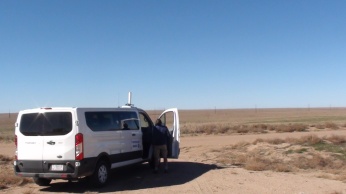 We arrive a good few minutes before the AirCore and try to spot its final descent.

Jack is the first to spot it.

It lands about a mile away next to the corn field. Since we are, by Colorado standards, in the ‘middle of nowhere’, we’re already on the closest road. So it’s a hike for me and Jack to go retrieve the payload. We find it intact. Jack puts caps on the valves, we pack it up and head back to Tim with the van. Total hike time: around 40 minutes. 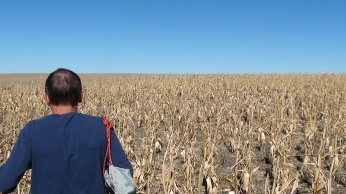 Mission accomplished! And now it’s an hour-and-a-half drive back to NOAA Boulder.

Back in the lab Tim sets to work analysing the two AirCores. It is the same process as pre-flight, purging the valves first, and then pushing through a gas of known fractions. However this time of course, the air we are pushing out of the AirCore is the sample taken during its descent.

The analyser shows an ‘unnatural’ spike in carbon monoxide first, this is the initial fill gas coming out ahead of the sample of air. The graphs then settle as the analyser begins to only read the sample air itself.

You know when the sample is finished being analysed because you start to see readings of the gas that you are using to push the sample out. When you look at the screen, I like to think of it as if the two readings of high CO either side of the sample reading are ‘bookends’.

To ensure that the first AirCore analysis is ‘accurate’, the second AirCore is then analysed in exactly the same manner. If the two sample readouts are more or less identical, then you can safely say you have captured an ‘accurate’ profile. If the second AirCore came out with different results, then one of the AirCores had problems and you have to figure out which one, and why! But today, we’ve had a good day from start to finish.

I’ve already had some excellent experiences here at NOAA ESRL, but I have to say that I’ve really enjoyed being involved in the AirCore. It really highlights all the intricacies and components (both physical and human) needed to make a project work – to develop it, trial it, link it into wider research etc. Also Tim Newberger and Jack Higgs have been very gracious having me around and making me feel part of the team, so a massive thanks to them!

So now my personal project is to put together an edited video of the AirCore process from prep to analysis, and build a dummy model of one for display so people on a tour can learn about AirCore, and how it nicely sums up the science taking place here at NOAA Boulder. So there is more to come… keep yourself posted! 🙂

If you wish to read the 2010 introductory article about AirCore, you can find it here: Karion, A., Sweeney, C., Tans, P., and Newberger, T., AirCore: An Innovative Atmospheric Sampling System, Journal of Atmospheric and Oceanic Technology, Nov. 2010, doi: 10.1175/2010JTECHA1448.1. And a reminder that you can see the ‘official’ webpage about AirCore here – the media work I’m doing may be used to update that webpage. We’ll see!

One thought on “Sky high”