Alright, alright, alright… You got me, I’m a football (soccer) nut! However, in my defense, surely it’s both good practice and motivating for a teacher to take advantage of anything that’s trending, popular or in-fashion, right?

Well, a large number of English are going absolutely potty right now. Check out this BBC report and this:

But, both as an England fan and teacher, I’m going to take no shame in capitalising on the current World Cup hysteria to give some more ideas for teaching resources (well, at least until Saturday when England crash out, right?) 😉

Has there been any correlation between global development statistics and the results in the tournament so far? (Update to the World Cup spreadsheet)

In my previous blog post, written as the World Cup got started, I posted up an Excel spreadsheet that I created for Geography teachers to take advantage of the football hub-bub that usually overtakes classrooms this time every four years.

I have added a new tab to the spreadsheet, finding which development statistics that I used from the UNDP HDR most match the actual results of the World Cup tournament so far.

You can download the updated spreadsheet here and have a play for yourself (also, see the previous blog post for more detail about how the main function of the spreadsheet works).

First, the group stages. Which of the selected development statistics did I use most closely matched up with how the teams ranked by the end of the group stage? Out of the eight groups, only one, Group B, ended up matching the ranking of the current ‘gold standard’ of development statistics, the Human Development Index. Spain topped the group only just on goals scored ahead of Portugal. But both teams qualified from their group rather comfortably over Iran and Morocco. Here, not only did the HDI rank match the final group places, but the relative values were pretty representative too. However, with the exception of Group G (England’s group), it was a challenge to final any development statistic that gave you the same result as the actual football results did. This, in my opinion is quite telling.

The graphic above can lead the way to some interesting classroom discussions either for a form time or perhaps a starter activity. Some ideas: 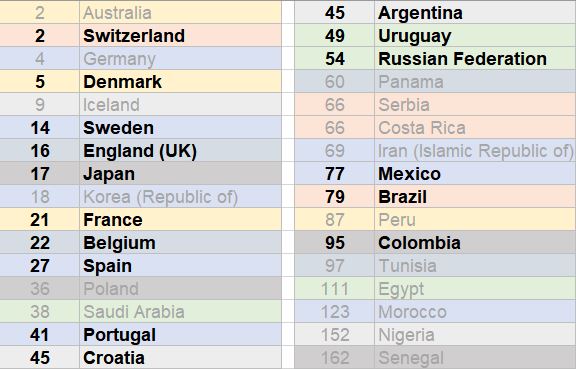 Then onto the Round of 16, the first of the knockout stages. Was there more or less of a link with a country’s level of development and success? While in a straight knock-out it was easier to find at least one development statistic which favoured the actual victor. However, only two of the results matched HDI rank, France overcoming Argentina and, yes, England beating Colombia.

So, the big question… Do the development statistics provide a good omen for England in their upcoming quarter-final against Sweden? They seem pretty evenly matched with Sweden ranked 14th and England (UK statistics) 16th in HDI. Well, I have some bad news I’m afraid! For the selected statistics on the spreadsheet, Sweden are better off in 18, while the UK are only better off in 6. That equates to a 3-1 win for Sweden. Development statistics from the spreadsheet roughly equate to the following results for the other matches:

Although those results look rather realistic, the good news for England fans is that development, on the whole, doesn’t have a huge influence over the result of a football match! So for now, keep chanting ‘Football’s Coming Home!‘

This one is not really a teachable resource because of football, but rather thanks to the quirks of social media. Gareth Southgate, England’s manager, has always had a reputation of somewhat of a ‘Mr Nice Guy’, but his attitude, composure and class during the tournment, especially in the aftermath of the penalty shoot-out against Colombia has spawned a fabulous hashtag on Twitter, bringing out creativity and humour from social media users.

Here are a few of my favourites, with my ‘Geography teacher’ hat on!

#GarethSouthgateWould let the dandelions grow in his garden, because they're a great source of nectar for pollinators like bees and butterflies! pic.twitter.com/fDonl9iR4j

#GarethSouthgateWould remember to get his bag-for-life out of the car, every time.

#GarethSouthgateWould pipette feed an injured baby bird, day and night, until it was strong enough to fly back into the wild. Then leave seeds out in winter and gaze through the window smiling, sipping on hot chocolate, as the same bird returns to collect food for its family.

#GarethSouthgateWould always do a #2minutebeachclean at the end of a day trip to the beach pic.twitter.com/Cpm2QlHls2

Of course, you could get your students to have a go at a geography related #GarethSouthgateWould tweet. If they are willing, they could even tweet it out on Twitter.

#GarethSouthgateWould say thank you at the end of each Geography lesson, even if it wasn't his favourite subject because he knows how important it is 😉 #geographyteacher

But the point really is that Twitter hashtags can make for a fantastic snappy starter, plenary or homework. Students can consolidate their learning by summarising a lesson in 280 characters, or define a keyword.

The bizarre but important, measurable knock-on effects of football

Major sporting events such as the football World Cup can provide an excellent base for an enquiry. Take this article from the BBC, for example, regarding the potential economic impacts on the UK if England do happen to reach the World Cup Final. 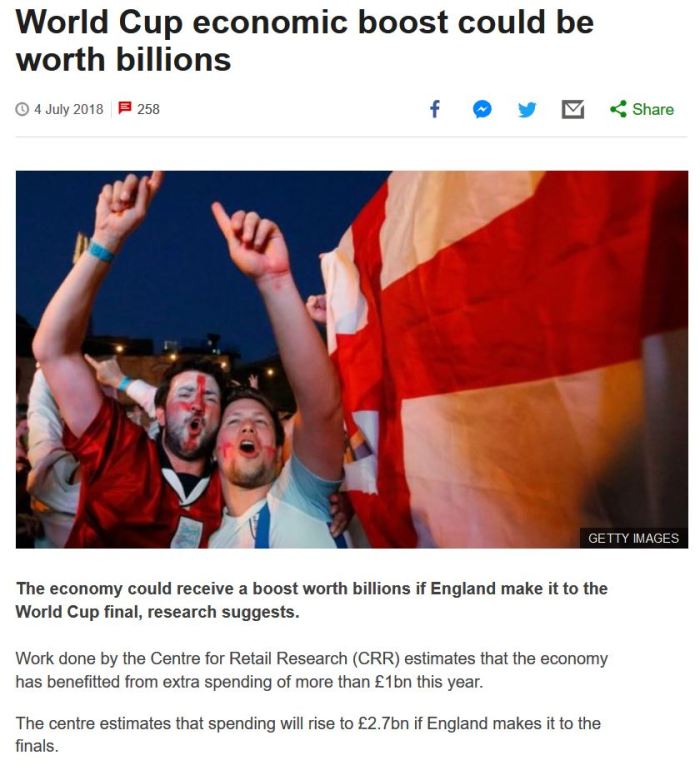 Discussions can centre around the statistics given in the article and tasks could be set. For example, students could create a diagram to visualise the links between football and the economy.

Other useful links for discussion:

And something more specific to the England v Sweden match, a short read regarding the weather conditions and water supply in the town where the game will be played:

The longer England stay in this tournament, the harder it will be to avoid that off-topic chatter about the football (or about how annoying it is) in the classroom. So, I suppose it’s with twisted hope that these teaching ideas will serve you well!