The original title of this blog post was: “Eye in the Sky: How and why educators should jump on the drone bandwagon!”, penned in my geeky enthusiasm in the aftermath of having played around with a drone (below).

Today I attended a very good session about drones by Richard Allaway at the GA Annual Conference. And it made me reflect and think… well… drones, yes, I want one, but do I need one (in terms of education)?

So the original post remains below – as I’m still enthusiastic about them, but also, take a look at Richard’s drone page which contains the presentation he gave.

#GAConf19 should also be about making you rethink and reassess. I love the idea of #drones but @richardallaway’s well balanced session has made me think whether they are as yet totally necessary, or a ‘must have’. Check out his page related to the talk: https://t.co/abs8s6kL8l

Yep, you heard right! My youngest has added ‘drone’ to his vocabulary. I’ve recently had the chance to have a play around with one. In this article, I’ll give my experiences and thoughts, with examples, about possible educational use.

A ‘drone’ is a type of UAV (Unmanned Aerial Vehicle) or UAS (Unmanned Aerial System), and it only seemed like yesterday that they were big news; yet another piece of technology making us think that the future is here.

An lo-and-behold, you can pick up a cheap (but probably no better than a christmas cracker toy) drone for some pocket money nowadays. As you can see from the screenshot below, there actually are 23 different models you can get for less than $50 (£38) from this US store:

Indeed, drones have become cheap and ubiquitous. So, here’s an idea for educators out there. The next time you have the chance to put in a ‘development bid’, or an opportunity arises for you to have a bit of spending money (don’t laugh, we can dream!), how about going in for a drone?

If you are an educational establishment, you probably going to want a drone with at least the following features, for the following reasons:

Out here in Bozeman, Montana, we had a big family get together on my father-in-law’s side. One family member brought along one such drone that falls within this price range and has at least the features above.

The official website for the DJI Mavic Pro Platinum ‘Quadcopter’ gives all its specifications and features in glorious commercial detail.

After a couple of demonstrations, I had a go myself. I’ll state here, that you best not rush into using a drone. This is one of those pieces of equipment where reading the instructions (or watching operational videos) is pretty important, or you open yourself up to some epic fails:

However, unlike trying to erect an IKEA wardrobe, at least it’s more fun to go over the instructions of a drone.

The footage is lovely and smooth while the drone is moving forward, but jerky when the drone turns. However, I later found out that you can turn a setting on which causes the turning, pitching etc to be a lot steadier, leading to smoother footage. You can also pivot the camera independently to point it straight forward all the way to straight down. The video shows that you can certainly fly a drone down a landscape and take footage where students can identify physical and human features.

The software that comes with this drone has may flight features, but I only got time to try out a couple. ‘Active Track’ is where the drone stays in-situ (it only moves if it has to, or you tell it to) and keeps the camera focused on an object or person of your choice.

(Don’t worry, the house isn’t on fire. I was multi-tasking, also grilling for dinner!).

Another tracking function is ‘Follow Me’, where the drone will ‘chase’ after you as you move.

Cameo appearance from a visiting friend and my youngest, there!

Off the top of my head I can think of a couple of ideas for the use of ‘follow me’. Perhaps following a float down a river to see the current it takes? Filming athletes, where tracking them can help the PE teacher and the student evaluate technique or performance? (Doesn’t have to be only Geography! Joint development bid between departments?) 😉 Be aware, however, that the sensors for most drones are in the camera which means if you are ‘following’ or ‘active tracking’, best not do either where there are obstacles such as buildings or trees.

The GPS function on the drone will help to track its flight. These tracks can be downloaded and worked on later; the drone can effectively be used for digital mapping. No doubt it can be tied into most GIS packages.

The GPS track above shows the path the drone took during a test flight to go take a closer look at a rock outcrop up the mountainside behind the house. Myself and others have hiked to that outcrop, which seems minutes away from the house (but actually took a couple of hours on foot). So, how well will the drone do? How close can I get (maintaining a large margin for safety/error)? As you can see, pretty damn close enough to get a detailed look at the outcrop!

There was plenty of battery left for me to do a little more flying before selecting the ‘Return To Home’ function. The drone auto-piloted back to the ‘home’ GPS tagged spot and landed itself.

Here’s a selection of pics both from the drone and from the ground.

Drones give you a fresh perspective on your local landscape!

You can technically set the drone to go up to 5000ft. However, US FAA regulations state that the drone must stay below 400ft above ground level unless special permission has been sought and granted. Still, up to 400ft AGL can give you pretty good views!.JPG

The operating distance for drones vary (both technically and due to weather conditions). I flew this drone at least a kilometer away.

The drone controller with docked smartphone. You can use the drone without the smartphone app, but then you will be without a lot of useful functions, no less a live stream from the drone’s camera and its GPS position.

This drone was pretty good at maining its hovering position despite a little bit of wind.

Drones need a clear landing area. I’ve seen too many YouTube videos where the the landing space was inadequate and the drone drifted and crashed.

Off it goes down the driveway chasing after my eldest using ‘Follow Me’! 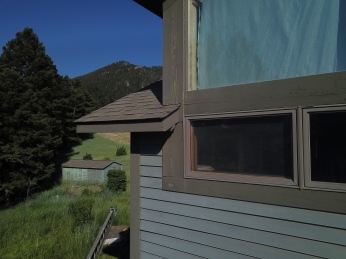 The drone will warn you if it detects it is too close to obsticles. I probably could have got a closer look at this wasp’s nest but since it’s not my drone, this was as close as I was comfortable with.
I would love to get a drone for the school. Also, as a geography teacher, imagining taking one on field trip just fills me with glee. It isn’t hard to do a quick web search to research potential uses of drones by schools across the curriculum:

In fact, the potential in using drones for exploring human and physical geography is so great, there has been a recent academic study on it:

This all looks seems great, doesn’t it!? But before you go rushing off and buying one, you need to be aware of the legal requirements for operating a UAV.

You cannot fly drones anywhere. There are restricted air spaces, and even if there aren’t, you probably would be better off double checking to see if you need permission to fly your drone over an area. Fortunately there are some free tools such as AirMapIO, No Fly Drones (where, if you so wish, you can add your own restriction), and DJI’s Fly Safe map. If you are in the USA, the authority to abide by is the FAA, and in the UK it is the CAA.

Also there is common sense. Best not fly a drone where they could be seen as invading privacy, causing a distraction or being a danger.

I don’t think any of the above should put you off, however. So, while you wait for that golden schmoozing opportunity in order to obtain one for your school or department, you’ll have to make do with footage taken by others. But, have no fear! There is no shortage of good drone footage. Just a Google search for what you are after followed by the word ‘drone’ will have a good chance of finding something. Like ‘cliff erosion drone’:

And finally, here is an online database of drone footage. The beauty of this being it is in the form of an interactive world map. Have fun exploring!

P.S. My sabbatical is self-funded and un-paid. Please check out my paid resources at TES and Teachers-Pay-Teachers! If you are looking for teaching resources for all subjects, not just Geography, please check out ZigZag education’s catalogue by clicking through my affiliate link here. If you do find something useful and purchase, I’ll get some commission to help me pay for a public transport fare etc! 😉 I also have free resources on my portfolio page, and you can check out an index of which of my blog entries match which parts the various UK GCSE Geography syllabuses!

You could also simply: