11 May 2019 – This is an imported page from an old blog I kept during my travels to Malawi. Next month (June 2019) as part of this year’s Norwich-Dedza Partnership exchange, teachers from Malawi will be visiting the UK. So in celebration and preparation for that, I will be re-blogging the thoughts I made during my visit in 2013.

You can find an index of all the 2013 Malawi blog entries here. Zikomo!

“We are all made of stars”

For the next two days, Joc and I followed a different programme from the rest of the group. From previous years of the partnership, there were two schools whose link teachers did not travel this time. One of these schools is Mcheneka Primary, headed by Mr David Kanduna (“Davie”). Davie visited the UK with the partnership last year, and told Joc he was determined to have us stay at his house.

Mcheneka is approximately 15 kilometres WSW of Dedza – not far at all, you may say. But the way is by unpaved dirt road, full of bruising divots and bumps. Joc and I were determined to travel in the least Western way possible, so we decided to go by bicycle taxi organised by our good friend and Umbwi-Framingham Earl link, Francis Mpakati. 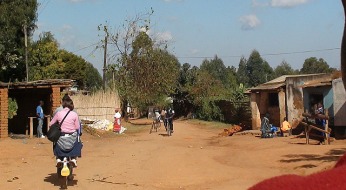 Taking a bicycle taxis on dusty roads for miles…

Joc on her bicycle taxi

A bicycle taxi is a very interesting way to travel! You have a bike with a pannier rack on the back but instead of your bags, there is a pad for you to sit on! The drivers of these taxis must be epically fit and strong as people very often carry luggage with them in from of their lap. So there were Joc, Francis and I on three bicycle taxis navigating holes, divots, cars (occasionally), ox carts, people etc. When the hills get too steep, we got off and walked; which was a nice stretch of the legs…

Upon arrival we were greeted by a huge wave of primary school students, rushing towards with a lot of joy and curiosity. I think when Joc called in Chichewa for them to sit down, they were both shocked and pleasantly surprised – but they sat immediately! What is very clear is that seeing a white person is at least a novelty. 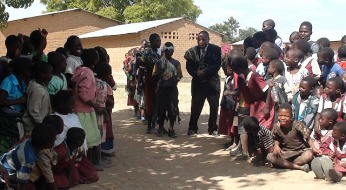 Welcomed with a dance

Staff at the school 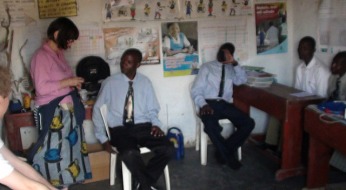 The staff congregated into the staff room where Davie welcomed us, stating that we are welcome to make Mcheneka our home. This sentiment was graciously repeated by the other members of staff who stated that they were honoured to have us. Joc and I were very clear in saying that we too were honoured and privileged for the wonderful welcome and kindness that had been shown to us. We presented gifts to the staff in the staff room on behalf of Mcheneka’s link school, Thomas Bullock Primary School in Dereham: teaching resources; wind-up ladybird (which we had to explain) torches (that we had to demonstrate) etc.

Mcheneka has around 1000 students, and as typical there are 50-60 students in a classroom. There is Standard 1 all the way to Standard 8 (which is the oldest), but unlike the UK, students will repeat a standard (year) if they do not pass the tests at the end of the year. Classrooms are very basic: 4 bare walls with a chalkboard on one, grated windows and wooden desks and chairs. Most students don a school uniform but what struck me was there seemed to be a number of children who were running onto the school grounds who were not enrolled. Davie confirmed that there were “too many” children from the village not in school.

Across the field (containing the ‘football pitch’) on the other side of the school grounds were a row of simple clay bungalow houses. These belonged to some of the staff, with the end house belonging to Davie. It is very modest but well furnished by Malawian standards: four rooms, one a living room/dining room that is no more than 20ft by 20ft; 2 bedrooms and a store room. Out the back is a dirt courtyard surrounded by a fence of neatly organised reeds. A small clay ventilated out-building serves as the kitchen, hosting a fire pit in the middle and some benches for comfort. There is a chicken coop (used only at night, the chickens are otherwise free to roam), and two reed-surrounded private areas: one a bathroom (stones to stand on, place for a bucket of water and a wooden ‘rail’ to hang clothes; and the other a pit latrine toilet. Most of this was engineered by Davie himself and he has done a rather good job of it. On the top of his house proudly stands a small solar panel, feeding an old car battery and inverter which in turn is used to power one energy-saving light bulb, charging sockets and a rarely used TV and DVD player. The house is as humble as its owner.

Davie has three children (two daughters and a son) and a wife, Juliet – who we found is an amazing cook. Lunching and dining at the house was a delight of soft nsima, beautifully seasoned vegetables and creatively spiced eggs. Chicory coffee, bread and butter were always on offer and each meal was preceded warm water poured into a bowl, over our hands, for us to give them a good scrub.

Juliet is not just a wonder with food, she is also very active in the community. She helps run a nursery for young orphans (see tomorrow’s entry) and a community cooperative banking group. The latter which we got to see for ourselves. The idea is simple: The willing participants started off by investing an equal sum of money into the cooperative. This money can be loaned out at an interest rate of 20% to any member. Each week, they meet in one of the primary school’s classrooms after the school day, to either take out further loans, or pay back what they owe. There is no bank involved and everyone takes responsibility since the only people to benefit from the scheme are the villagers themselves. No one will dare attempt to steal or run off with the money due to this shared community and responsibility, but there is an extra safety net by having bookkeepers and three padlocks for the ‘treasure’ box, with each key having a different owner. Upon a loan given out, or a repayment made, a song is sung. Anyone who fails to repay a song of ‘encouragement’ ensues. With all the people back home moaning about the way the banks operate – could this be the way forward? (Singing and dancing optional, of course!)

After a long day, a dusk walk was followed by a spot of stargazing. It is amazing what the night sky can do when there is no light pollution! Many stars, the milky way, regular shooting stars and satellites all easy to see. And while the southern sky is alien to us azungu (white people) from the north, it still succeeds to remind me of one thing – we are all one in the universe.

2 thoughts on “We are all made of stars”