11 May 2019 – This is an imported page from an old blog I kept during my travels to Malawi. Next month (June 2019) as part of this year’s Norwich-Dedza Partnership exchange, teachers from Malawi will be visiting the UK. So in celebration and preparation for that, I will be re-blogging the thoughts I made during my visit in 2013.

You can find an index of all the 2013 Malawi blog entries here. Zikomo!

“The old lady, the cow and the goat”

I will spare the details, but I had a lovely bath this morning! Just picture standing under a bright blue sky and surrounded by tall tightly-backed reeds. On the ground is a clean, smooth platform of rock and next to it a very large bowl of heated fresh water. A bar of soap, your clean clothes hanging some shaped wood sitting horizontal across the entrance and you are good to go! It was the most refreshing wash I have ever had!

Davie, his family and his humble abode

The village of Mcheneka is an ‘average’ village according to Davie. Sited along a dirt road, there are scattered houses made from clay brick and straw roofs. It would appear that most of these homes are not as spacious nor as well furnished as Davie’s. There are chickens and goats running loose but never straying far from their abode, and people tending to the fields of maize (corn) or using a water pump. A fair number of these are children, who Davie laments should be in school but families are too poor to afford it. Using the roads are cyclists carrying huge loads (wooden panels, cut reeds, sacks etc), cows (mostly being herded by children) or oxen pulling carts, again often loaded with children and the product that they are responsible for. Sometimes we saw cows being herded with donkeys, and apparently that is the sign of a farmer or family who is not doing too badly. A donkey in Malawi is a very versatile animal and therefore quite expensive. There is one village shop that we saw, no more than a small shack crammed with bottles of Fanta, Sprite and Coca Cola, batteries, sanitary goods and, would you believe, mobile phone top-up cards. It seems that although not everyone has clean water, or a substantial amount of food, they still have a mobile phone and a phone signal…

Often during our walk we were stopped by a number of people wanting to say hello to us. They were all, at some point, Davie’s “products” or “fruits”; his former students. They all showed him a high level of respect and praise. They also spoke very good English and seemed to be doing pretty well. One young man in particular was almost to be a qualified accountant in the city, but has returned to help his family with their soya bean harvest.

We turned off the “main road” and headed down a smaller (and even more divoted and ditched) road through yet more corn fields, until we reached a bluff overlooking a wonderfully picturesque valley. This was the view towards Mozambique. It showed people working the land (which they have to get permission from the afomo (chief) of the land first) for maize, bananas and sometimes potatoes. But it was very clear that the land was suffering from large scale deforestation. Davie was certain that only a few years ago the land was covered in many more trees, but a growth in population and the demand for wood as a resource is stripping the land. Around the school, the villagers attempt to coppice and replant the trees, as taking care of the land and its flora is something very much encouraged in schools.

Coming back into the village proper we popped into to see the nursery of orphan children. Just a single roomed building, no bigger than a British living room. Two entrances with no doors and a fabric poster on the wall displaying shapes with “Mathematics” scratched on the wall in chalk next to it. These little children ranging between 3 and 5 years old were much shier than the children of the Primary school (some of whom had raced over to us to see what we were doing, having Davie bark at them to get back to class). Joc asked for permission to tell a little story with Davie as translator. It was that of the Gingerbread man! Joc, in typical careful dramatic style told the story with actions for the children to (sheepishly) follow. She played the old lady, I played the cow and Davie played the goat. Much to the amusement of all spectators!

Early afternoon; and with a goodbye to Davie’s family and the staff at school it was time to leave Mcheneka and return to Dedza. But on the way we were to stop at Chisiri Primary, another link school. Davie was not happy to send us off unaided, so he asked his 13 year old son, Innocence and a friend to sport some bicycles. These were budding taxies as they had the ‘pannier’ rack on the back, but not yet padded. We were lighter on luggage this time, due to alighting our gifts for Davie and his school but we were still amazed of the strength, stamina and endurance of these young lads. Innocence was able to communicate in basic English and took great pleasure in teaching me parts of a bicycle in Chichewa (all of which I’ve forgotten!) We did suffer a fault; a heavy bump saw the break off my bike become detached, making a wretched scraping noise on the ground, not to mention the realisation of the inability to stop! Fortunately, we were able to slow down using our feet and the boys set about fixing the damage, thanks to a spanner that was tied to Innocence’s bike. 20 minutes later and sterling work from the young men we were on our way again. By the time we reached Chisiri, the school had done for the day but there waiting for us was their headteacher Horace Mlongoti and our friend Francis. 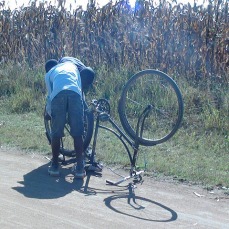 Fixing on the fly 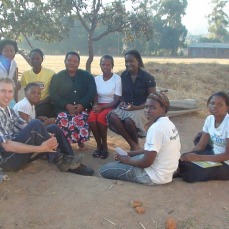 The Chisiri teachers (some student teachers)

During our 2 hour waiting for ‘official’ bicycle taxies to take us back to Dedza, Horace hosted us with a refreshing Fanta and some biscuits. We were shown the two new classrooms, very spacious but unoriginal and basic, adding further to my admiration for the teachers who have to work on the proverbial shoe string. Then by coincidence we were joined by a number of teachers and student teachers at Chisiri school; all female. We waited out the rest of the time having much fun: me demonstrating my very clumsy Chichewa with the aid of my photos from home; Francis’ sense of humour bringing out plenty of chuckles and Joc’s detailed tales of our experiences so far. One of the ladies is a staunch Liverpool FC supporter. So when I told her that my brother-in-law also supports Liverpool, she demanded to meet him. I think my sister better watch out!

We arrived back at Panjera Lodge at twilight. The rest of the group undoubtedly relieved to see us alive after going incognito for two days.

2 thoughts on “The old lady, the cow and the goat”