I am privileged to be working with a number of wonderful people here at the Exploratorium. One in particular is the museum’s self-proclaimed ‘loose cannon’, a title that I have quickly discovered is well deserved and earned, in the positive sense!

While the Exploratorium has a wide range of staff, departments and projects, Ron Hipschman seems to be everywhere. When I name drop anyone to anybody else, there are always one or two who don’t know who I’m talking about… but Ron’s a name everyone recognises, often with affectionate banter if not admiration and respect! And it is easy to see why; he is a veteran of the Exploratorium and whenever I have spent time with him, he is engaging, personable and intellectually passionate, clearly loving his loose cannon role.

One the many things Ron gets up to is public speaking. One thing we have in common is we both share this desire to pass on our knowledge to others; in unashamed grandeur to as many people as possible. So it’s not suprising that quite often he is found on a stage with a table full of props in front of a projector screen. 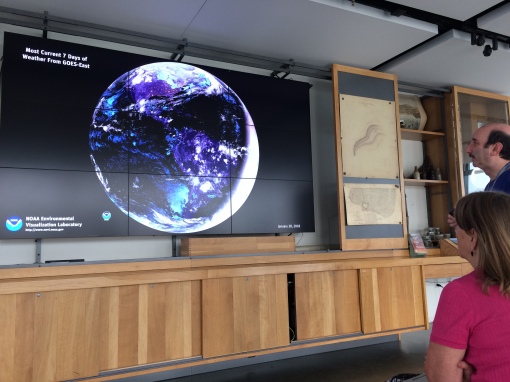 Ron, Mary and I looking at the new imagery from NOAA’s GOES-East satellite. Ron uses his contacts at NOAA to obtain specific imagery to fit the hyperwall and runs script to 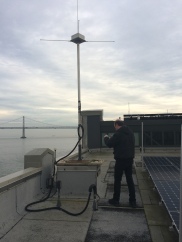 Ron inspects the base of the radar pole on the roof of the Exploratorium. Turns out it is in need of repair!

Ron’s ‘Everything Matters’ series, where he explores one element a month during a Thursday’s After Dark.

Ron currently has two series ongoing: ‘Everything Matters: Tales From the Periodic Table‘, exploring lore, stories and applications behind every element of the periodic table, in order of their atomic number; and ‘Full Spectrum Science‘. In the latter series I had the privilege of giving my own talk to compliment Ron’s latest Full Spectrum Science talk titled: ‘The Last Doubling’.

The exponential function & ‘The Last Doubling’

Ron’s talk was based on the ‘exponential function’, which in real-world terms is far more simpler than this Wikipedia entry would make you believe. It’s all about doubling…

Let’s say that the bacteria double in number every hour. So after 1 hour you have 2 bacteria, and after 2 hours you have 4… If we were to put that in a graph, it would look like this:

The graph shows that after a relatively slow start, the number of bacteria being to grow very rapidly. After just 6 hours there are 64 bacteria. 1 hour later there will be 128, and after 8 hours there will be 256.

The doubling time is 1 hour, since the time it takes for the number of bacteria to double is 1 hour.

We’ll come back to bacteria shortly…

My favourite part of Ron’s talk was the fable of the wheat on a chessboard, using props such from small containers of wheat, a bag of wheat and then asking the audience to imagine a whole Exploratorium full of wheat and so forth. Here’s a video I found on YouTube that tells the same fable:

This poses a problem with exponential growth. It doesn’t take long after enough rounds of doubling for numbers to become huge and unsustainable.

When talking about bacterial growth, Ron assumed that his ‘digital’ bacteria had a double time of 1 minute, and placed one bacterium in a jar at 11am in the morning. At 11:01 there were 2 bacteria, 11:02 there were 4, 11:03 there were 8… Ron hypothetically leaves the bacteria alone for a bit and comes back at 12:00 and the jar is completely full.

The answer to the first question is obvious, right? It must be 11:30? Ah, but the bacteria are doubling every minute, so the jar was half full at 11:59! So at what time was the jar a quarter full? An eighth full? You got it? 🙂

The second question is of course rhetorical. But would the bacteria have thought they had a problem at 11:57, when the jar was an eighth (12.5%) full when there’s still 87.5% of the jar left to grow in?

Ron then began to press home the problem of exponential growth. Even if the bacteria went off exploring for more jars (i.e. more resources) and found say 3 more jars to grow in, they would be filled in just 2 minutes (1 jar doubles to 2 jars in one minute, 2 jars double to 4 the next minute). Ron here is echoing the thoughts of the late Carl Sagan:

“Exponentials can’t go on forever, because they will gobble up everything.”

…and from a 1972 report based on a computer simulation called ‘The Limits to Growth’:

“Exponential growth never can go on very long in a finite space with finite resources.”

I don’t know about you, but I kind of feel like the human race is at 11:57 with the way that we are treating the planet and rate we are using it’s resources. It seems we are hell-bent on being in denial about the problem too.

Ron also looked into human population. It’s clear that the human race simply cannot continue to exponentially grow. When you look at the graph below showing the world population since 10,000BC, it most certainly has a frightening exponential look to it like the bacteria one above.

At Last: Cause for Cautious Optimism

Ron indulged me in a preview of his talk a few days before he first gave it, and I immediately proposed the idea to give an off-shoot talk of my own focusing on world population growth and how it is already starting to break out of the exponential function. 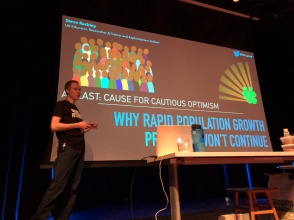 Now before I continue, I will state from the off that the idea was not totally my own, but heavily inspired by the late Professor Hans Rosling and a documentary he gave for the BBC a few years back. The educational work that Hans Rosling, his family and the Gapminder Foundation have done and continue to do today is a major source of inspiration for me. So when I had the idea to give a presentation based on that BBC documentary and the Gapminder Foundation’s work in context of Ron’s talk, I jumped at the chance.

You can scroll to the bottom of this entry and a recording of the full 30 minute talk that I gave. Here are the ‘highlights’: 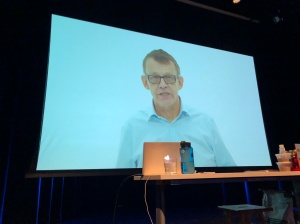 I finished off the talk by playing a short clip of Hans Rosling explaining that tackling poverty is key to driving down fertility rates, addressing a misconception that doing so will actually cause greater population growth.

But while the world population growth rate is continuing to fall there are challenges ahead which could potentially upset this ‘good news.

Mother Nature has a way of redressing imbalances. One example that springs to mind is the way cordyceps fungi controls populations of insects. The more insects there are, the more the fungi spreads and kills back the population. So in my opinion, whether through ‘natural’ demographic change as we have at the moment where the growth rate is slowing to zero, or if Mother Nature deciding that enough-is-enough for the human race, then exponential growth of the human race simply cannot continue. Sure we can go an colonise other planets… but think back to the analogy of bacteria looking for more jars, not to mention the fact that we are still a long long way from that being an equal opportunity available to all humans (it’ll probably create even greater inequality).

I got very positive feedback from my talk, and I may get the chance to give it to a wider audience within the next couple of weeks. But for all the credit I got, I have to pass all of it onto the inspiration for both the talk and my passion to pass on these messages… RIP Hans.

Thanks to Dylan Jutt for the photos! 🙂

Indeed I was fortunate to be given the opportunity to give the talk again. During Thursday 8th March’s After Dark at the Exploratorium I gave an extended reprise, including a tribute to Hans Rosling. The blurb and recording of the talk is below.

The number of people on this planet quadrupled in the 20th century. Currently at 7.6 billion people, world population continues to grow by millions every year. If it continues at the rapid rate it’s going, the impacts upon our planet and way of life may be enormous.

But what if the population growth rate slows down instead? Join us as educator and Fisher Bay Observatory Fellow Steve Rackley demonstrates how a natural evolution of human demographics is currently slowing down global population growth. While birthrate projections cannot be certain, Rackley presents a case for cautious optimism.

5 thoughts on “Defeating the exponential function”